“I want to support other girls who have lost hope”

Seed of Hope provides more than skills training to our young people across the counties we are working in Kenya.  The majority of the young people have said that Seed of Hope has enabled them to grow; spiritually, mentally, emotionally and also in different skills.  The graduates also tell us how Seed of Hope has built their confidence, self-esteem and character, which has transformed their lives positively.

Currently we have girls who have taken up leadership roles thanks to various programmes implemented like the mentorship, Amuka, peer education, and focused group discussions that help to bring out the inner strength and confidence from our girls just like in the case of Esther, a fashion and design student.  Esther joined the Seed of Hope Nairobi centre in the second term of 2018 after trying out casual jobs in order to support her father.  When she enrolled, she would come into class very early and sit alone at the corner where nobody will recognize her presence.  She was softly spoken and shy but managed to stand out among other girls with her mode of dressing, makeup and hair styles. 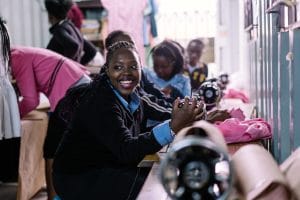 It was when Seed of Hope moved to its new premises that I got the opportunity to know more about Esther since she was among the few girls who remained behind as the other students went for their industrial attachment.  As I interacted and got to know our students better, I learnt that Esther is the last born in a family of two.  They were raised by their father after the death of their mum when she was 15 years.  Her father remarried so that his daughters could get motherly care, advice and support but this did not last as they separated when Esther was about to complete secondary education.  This affected her thus she did not perform well at the end of secondary school exams.

For the one year she stayed home, Esther was lonely with no hope of going to college as her father, who works as a security guard, had struggled to pay for her secondary education and it was obvious that he would not afford the college fee.  This forced her to go out and look for any job in order to meet her personal needs, as well as support her father in paying the bills.  According to Esther, this was the best decision she made because it was during her daily duties as a house help that she met one of Seed of Hope graduates who informed her about the programme and the courses being offered.  Esther shared this news with her father who decided to inquire further by vising the Seed of Hope centre.  He feared the fee payment but at the same time he did not want to disappoint his daughter.  After getting positive feedback from the Seed of Hope project administrator about the free courses, Esther’s father did not hesitate and asked his daughter to enrol immediately.

At Seed of Hope, Esther has greatly transformed from the shy girl at the corner of her class to this bold, confident and responsible girl.  She was anonymously elected by other students as the Head Girl since she has led students to participate in different activities within the school and also with our partners.  She is also in charge of the dressmaking, fashion design class and the teacher has entrusted her with the role of assisting other students as she has worked hard to perfect her skills.

In the last few weeks, Esther has been attached to one of our Seed of Hope graduates called Rosebella.  When I asked her teacher why she chose Esther, she said; “I have trained so many of our girls at Seed of Hope and I could tell the potential each one has.  Esther has shown interest and commitment in her course by working hard to improve her skills.  I want her to learn more from professionals like Rosebella who have been in this business for a long time so she too can build her own empire in future.”  When I asked Esther about her ambition in life, she said; “After graduating, I would like to start my own fashion business that will be recognized regionally but also internationally. I also want to support other young girls like me who have lost hope and face challenges in their lives.”  We wish Esther all the best even as she prepares to graduate at the end of the year.

In other news, the Seed of Hope centres took a short recess beginning of August but they will be resuming in the first week of September.  Apart from the Amuka programme, our students were given the opportunity to voice their concerns, share ideas and suggestion on how we can improve the programme through the focused group discussions.  They also participated in visioning meetings for the Nairobi new build project as we plan for the future growth of the Seed of Hope programme.  We believe that by engaging our students, their concerns, views and suggestions will significantly bring change, growth and development as they are the reason that Seed of Hope programme exists.

On behalf of our girls, teachers and management we would like sincerely thank you for the generous contribution towards this programme as we would not have made it this far without your support.  I believe that you will walk with us in this journey of transformation as we give hundreds of girls hope and opportunity to become change makers in their own lives, their families and the community they live in.  In as much as the impact is measurable, there are still many young girls who are unreachable and are in need our support to become self-sustained hence raise their standards of living.

Thank you again for your kind support!