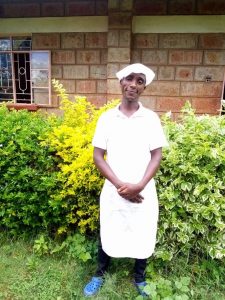 Harrison joined Seed of Hope Kariti centre in January 2019 after being expelled from a college due to bad company that introduced him to drugs that made him miss classes regularly. When he came to Seed of Hope he was hopeless, dejected and feeling guilty since he had wasted his family resources on drugs and did not complete his training in catering and hospitality.  Harrison learnt about our programme through a graduate who encouraged him to seek the opportunity to join the institution to make up for the time he had wasted in alcohol and other substance abuse. He was asked to be accompanied by a parent during admission and his father, though disappointed, came not sure what Seed of Hope would do to change his son’s life. Harrison was interested in home care management, a course similar to what he had pursued before he dropped out.

In the 3 months since he joined Seed of hope, Harrison has developed into a disciplined, confident and well behaved young man. This transformation came through support from his new friends, counselling from teachers and the mentorship programme which is facilitated by a young priest who comes weekly to mentor the students. Harrison is working hard in his course of study as he looks forward to graduate at the end of the year before going out to look for employment so he can become self – reliant. During our discussion he had this to say “ I really thank Seed of Hope for the second chance in life. I had lost myself because of peer influence but now I am reformed through the support I have received at Seed of Hope. Once I graduate and get a stable job, I would also like to help another young person who has lost his way through bad company.”  Harrison’s father has come back to thank the teachers for transforming his son’s life. We wish wish all the best as he has been recognized by the teachers as one of the most improved student in 2019 so far!

Seed of Hope programme has continued to transform lives of young people across Kenya. This can be attested by the number of graduates who are in employment and self-employed as well as those who have gone back to school to either complete their secondary education or advance in courses they trained while at Seed of Hope. We are able to measure the impact by the number of students enrolled at our Seed of Hope centres each year until completion of the course of their choice. We also have witnessed the changes in behaviour, attitude and characters of young people after joining Seed of Hope just like in the case of Harrison.

All this would not have been possible were it not for your continuous support towards he Seed of Hope. I would like to sincerely thank you because it is through your giving, that has made it possible for the young people to transform and believe in themselves. They have the opportunity to reach their potential and shape their destiny while creating positive impact wherever they go.